A deeply reflective artistic discourse on a woman and her condition in the contemporary world. Dismantling stereotypical gender roles. Woman exalted.

Agata Smalcerz:
The exhibition Unflattering Image features works which were created between 2011 and 2018. Beata Ewa Białecka’s paintings reflect traumatic experiences – suffering, illness, bereavement – and her simplified forms are chiselled with the use chiaroscuro which makes them slightly similar to the figures in Fernando Léger’s paintings, as well as giving them a powerfully universal character. They are not portraits of specific female models, but symbolic images which make use of long-established representations of suffering mothers, such as Pietà or Mater Dolorosa. The artist's most recent paintings include elements of embroidery giving the work new aesthetic qualities, and more importantly, enhancing the contents.

Beata Ewa Białecka:
I am immersed in a woman's world. I've been relentlessly feminizing religious iconography for years, transforming masculine icons into feminine ones, and dismantling stereotypical gender roles.
I accentuate and exalt the role of a woman, and the matrilineal relationships between women. I often paint a woman as a suffering mother in the form of a Pieta or Mater Dolorosa.
The exhibition features my work from the last five years. These are smaller paintings with more attention to detail, and reflecting a more contemplative approach to art.
I have enhanced traditional painting by adding an element of craft. My stretcher bar doubles as a sewing frame on which the painting surface is pierced, and consequently defaced, with a needle. Embroidery is a repetitive, meditative activity, which can sooth pain, and ease nerves. Embroidered lungs, hearts, hands and feet form a latter-day reliquary. The expression "must-have" takes on a new meaning as the stigmata on hands and feet take the form of embroidered patterns. Is this a spin on reality or rather a way to express a deep conviction that suffering is an intrinsic part of life that spares no one? In Christian tradition, stigmata symbolise pain and suffering which are necessary for redemption.
My daughter-figures are clothed in death or mourning dresses, by which I show irrational reverence and at the same time undergo a unique rite of passage.
I engage in dialogue with the tradition of religious embroidery, Virgin Mary dresses and liturgical vestments. I put a kind of “surplice” on a painted figure in order to give the image a sacred character.

Marta Smolińska, Post-feminism Embroidered. Critical Painting by Beata Ewa Białecka, Artluk no. 3-4 2014 (excerpt):
I see Beata Ewa Białecka’s work as a multi-faceted and deeply reflective treatise on a woman and her condition in the modern world. The artist has devoted her entire creative career to the portrayal of  women engaged in an ongoing dialogue with both traditional Christian iconography, which stereotypically depicts Eve as a symbol of sin, and the iconosphere of popular culture or advertising. Białecka probes deep into gender roles in order to de(con)struct them and offer a new look from a less obvious perspective. She questions the condition of modern man faced with the tyranny of choice, trappings of consumerism and pressure of fashion. (…) 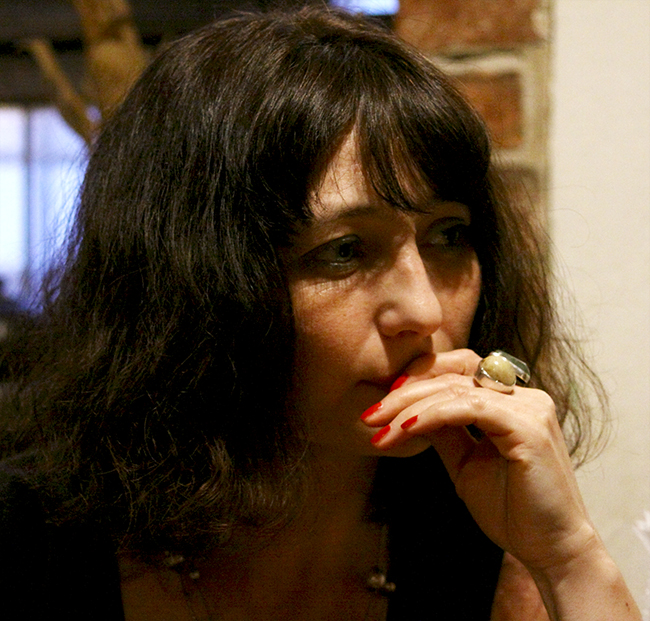 Beata Ewa Białecka was born in 1966 in Mikołów. She is a graduate of the Faculty of Easel Painting at the Academy of Fine Arts in Kraków; degree under Professor Jerzy Nowosielski (1992). Winner of the gold badge of Primus Inter Pares from the Academy of Fine Arts in Kraków (1992), nominated for the Polityka Passport Award in the category of Visual Arts (2007) and to the Sovereign European Art Prize (2008). Scholarships from the Academy of Fine Arts in Kraków (six-month residence in Syke, Germany, 1991); the Minister of Culture and National Heritage (1999); the Mayor of the City of Gdańsk (2005, 2018), and the Marshal of the Province of Pomerania (2006, 2008, 2011, 2018). Nominated for the Pomeranian Artistic Award 2016 (Gdańsk, 2017). Winner of the Grand Prix of the Minister of Culture and National Heritage at the 6th Triennale “Sacrum. Art against Evil” in the Municipal Art Gallery in Częstochowa and at the 21st Contemporary Polish Painting Festival at the Castle of Pomeranian Dukes in Szczecin (2006). Jury Award at the 36th National Competition of Contemporary Painting Bielska Jesień in Galeria Bielska BWA (2003) and the Artluk  Editorial Team Award at the Art Fair organized in Bielsko-Biała by Galeria Bielska BWA (2010).