A photographic exhibition offering an alternative perspective on time and space. Buried in the ground to decompose and penetrate into the fabric of the city,  the artist’s “little views” are the exact opposite of monuments.

Patrycja Dołowy buries small pictures in selected urban spaces – an activity she started back in 2011. This is an allusion to her childhood play of hiding “little views” or “secrets”. Nowadays, the artist makes plaster casts of her own body parts, covers them with photographic emulsion, and then uses an enlarger to print fragments of photographs, like pieces of history, on the casts which she finally buries in the ground. Each of the views is accompanied by snippets of a secret story, one that is made available to the chosen few.
The work is an artistic attempt to provide a different perspective on time, or memory, and space. Unlike monumental bronze statues, Little Views tell many everyday stories and will decompose and penetrate into the fabric of city.

The exhibition Little Views by Patrycja Dołowy contains references to the 80th anniversary of the outbreak of the Second World War.

Local people had a chance to get a taste of Patrycja Dołowy’s performative acts in 2017, when they were invited to accompany her while she buried her “Little Views” in different urban spaces. For this purpose, she used a small blue shovel, which soon became the artist’s trademark.
Her direct inspiration was the play Dybbuk directed by Paweł Passini.  Staged two years ago in Teatr Polski in Bielsko-Biała, the play was an adaptation of a script by Artur Pałyga containing numerous references to Jewish legends and beliefs, and to the history of local Jews of whom very few traces remain today. Back then, the artist also made plaster casts with photographs of nameless citizens of Bielsko and Biała which she then buried in places mentioned in the play. These included the courtyard of the house at ul. 11 Listopada 63 and the former Jewish launderette there, the steps leading the Castle which replaced the former house occupied by the Jewish merchant and bibliophile Salomon Halberstam,  and a spot outside the Gallery building built on the site of a synagogue which was burnt down during the war. 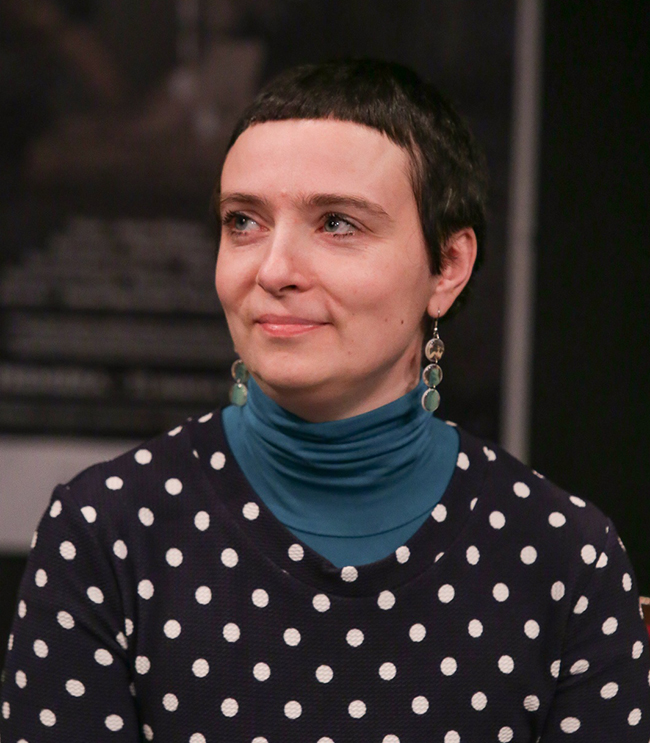 Patrycja Dołowy – media artist, writer, social activist.
For many years, she has dealt with various issues related to identity and memory. Her work is based on both spoken accounts and written evidence.
She is a doctor of natural sciences (2007) and graduate of the University of Warsaw (2002) and the Academy of Art Photography in Wrocław (2005). She has more than 60 exhibitions to her name, both in Poland and abroad.
Her work and texts are published in various artistic and cultural magazines.
She is the author of the blog Widoczki: Pamięć miasta/Pamięć ciała (Little Views: Memory of a City/Memory of the Body) and theatre plays including Hideout/Kryjówka, Matki, Hindełe, Siostra Sztukmistrza; and co-author of a number of books. Two-time winner of a grant of the Ministry of Culture and National Heritage, scholarship holder of Asylum Arts in London, winner of awards, including the Karol Sabath Award and an honourable mention in the Small Theatre Forms Festival “Kontrapunkt”. This spring saw the publication of her book entitled Wrócę gdy będziesz spała. Rozmowy z dziećmi Holocaustu (I'll be back when you are asleep. Conversations with children of the Holocaust (published by Czarne, 2019).