Made [in] Ready – Objects, Symbols, Actions

Exhibition of works by accomplished artists, graduates and students of the Audiovisual and Performative Activities Studio of the Academy of Arts in Szczecin to see online.

This is the first in a series of exhibitions marking the 10th anniversary of the Studio of Audiovisual and Performative Activities of the Art Academy in Szczecin. Following the premiere in Galeria Bielska BWA, the exhibition will be presented in Szczecin, Ostrava, Gorzów Wielkopolski, Elbląg and Jelenia Góra.

The Audiovisual and Performative Activities Studio of the Academy of Arts in Szczecin was established in 2010 by Professor Kamil Kuskowski. The underlying idea behind all its activities is the relationship between the image, sound and action (performance).  Quite a few outstanding individuals, both teachers and students, have made their mark in visual arts since the establishment of the Studio.

The exhibition is curated by Professor Kamil Kuskowski, the head of the Audiovisual and Performative Activities Studio, and Dr Dariusz Fodczuk, an associate professor at the Studio.

Kamil Kuskowski, Dariusz Fodczuk:
From our very beginnings, we have emphasised the need to work with simple everyday objects. The underlying idea behind our numerous activities is to reveal and change the meanings that can be associated with specific objects, simple actions and gestures. Referring to the tradition of Dadaism and the achievements of conceptual art, students explore the issues of changing the status of objects. Their  deconstructive practices, interference in the form and conscious use of the context, all lead them to develop visual communication skills and abilities to construct logical statements that are based on visual orders and codes. Modern artistic education has long broken up with the 19th-century academicism. Nowadays, its foundations are based on methodologies and assumptions that are poles apart from those in the past. What was once considered anarchic and foolish now forms the basis for methodologies that not only define artistic skills, but also determine the development of critical sensitivity, which, in consequence, allows effective communication of important social or political problems. In this approach, the purpose of education is to develop skills in critical and analytical perception with the use of methodologies aimed at training creative thought and arousing curiosity. Individual workshops and development of manual skills have become less important. In the method developed in the studio, the efficiency of thought processes and their evaluation replace traditional workshops and emphasis on manual dexterity.
This exhibition features works by artists associated with the studio, whose common feature is a specific approach to the subject matter and its meaning.
The works presented at the exhibition are arranged in three sections corresponding to the title “objects, symbols and actions”, works related to deconstruction and interference into the form of objects; papers on social and political issues; works of greater formal complexity, combining various media and using their mutual relationship to build the effectiveness of the message.
The invited artists present new works that are dedicated specifically to this project, as well as "old" ones that have been made during the classes. 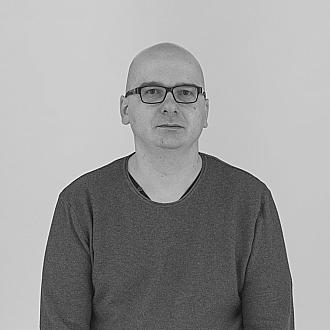 Kamil Kuskowski – an artist, curator of exhibitions, commissioner of competitions, organizer of scientific sessions, examiner, juror in art competitions. He was born in 1973 in Zakopane; graduate of the Antoni Kenar Secondary School of Fine Arts in Zakopane (1992) and the Władysław Strzemiński Academy of Fine Arts in Łódź where he obtained honour’s degree at the Department of Textiles and Clothing in 2000. Professor of fine arts since 2012; researcher and lecturer at the Academy of Fine Arts in Łódź from 1999 to 2011.
He is the winner of numerous awards, including the Grand Prix of the Minister of Culture and National Heritage and the award of the Art & Business magazine at the 39th Painting Biennale Bielska Jesień in Bielsko-Biała; honourable mentions from the jury and award of the Arts Magazine at the 8th E. Geppert Painting Competition in Wrocław; Arteon Art Magazine Award for the best artist in 2008. He has held about 40 solo exhibitions, and took part in over a hundred group exhibitions. His works can be found in the collections of the Museum of Art in Łódź; The Zachęta Contemporary Art in Szczecin; The Wyspa w Gdańsku Institute of Art; Galeria Piekary in Poznań; Zero Gallery in Berlin, Galeria Bielska BWA in Bielsko-Biała; the Municipal Art Gallery in Łódź. 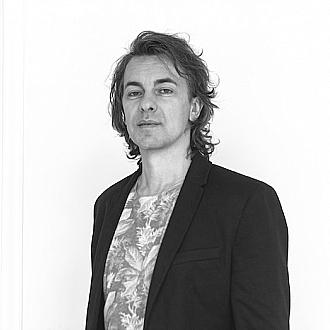 Dariusz Fodczuk – an artist engaged in performance, sculpture, painting and video art, as well as curatorial activity.
He was born in 1966 in Pisz. He graduated from the Institute of Art Education of the Maria Curie-Skłodowska University in Lublin. He obtained a degree in 1992 in the painting studio of Professor Marian Stelmasik under the academic supervision of Associate Professor Mikołaj Smoczyński. He has presented his works at many art competitions and festivals in Europe, North America and Asia. Co-organizer of the Interaction International Art Festival in Piotrków Trybunalski, organizer of the Interaction in Bielsko-Biała, curator of the performance block of the International Communication Festival at the Elektrownia Culturl Centre in Radom (2009); originator and curator of the first Festival of Visual Arts in Bielsko-Biała; participant of international artist-in-residence programmes.
Winner of The Laurel of Remembrance Award for his activities for the Polish-Jewish dialogue which was presented by the Israeli Embassy in Poland and the Foundation for the Preservation of Jewish Heritage in Poland (2017). Winner of the 3rd prize of the Kalisz Biennale of Graphic and Drawing (2014); nominated for the “Icarus”, Award of the Mayor of Bielsko-Biała in the Field of Culture (2008).

He has exhibited his artwork at over 200 festivals and group exhibitions, and over 40 solo exhibitions in Poland and on several continents. His works can be found in the Jan Tarasin Art Gallery Collection in Kalisz, Fabrikken for Kunst og Design in Copenhagen (Denmark), the Historical Museum in Bielsko-Biała, MODEM, Center of Modern and Contemporary Art in Debrecen (Hungary), Art Collection of Galeria Bielska BWA in Bielsko-Biała.

You can also see his sculptures in public spaces. These include “Haus, Amt, Werk” in the Sculpture Park in Wolfsburg (Germany), on the Sulejowski Square in Piotrków Trybunalski and The Acrobat in the park next to the Town Hall in Bielsko-Biała.

Photos from the exhibition (41 photos)