Bielska Jesień, a long-established competition, is continuously modified, always open to new happenings and the latest trends in art, and responsive to the needs of artistic circles. It aims to present the latest  developments and achievements in painting, as well as popularizing art. The biennale is accompanied by numerous events, speeches delivered by artists and art critics, contests, workshops and educational activities which are run by artists.

Bielska Jesień is a national biennial competition of contemporary paintings created by Polish artists who live in Poland and abroad. There are no age restrictions. The biennale is organized by Galeria Bielska BWA. Bielska Jesień has always had an open form with no imposed theme, technique or format, the only selection criterion being artistic quality  which is measured by the originality of form and content. Since 2013, the competition has been open to all adult artists, with or without a degree from an art academy, who actively practice painting and boast a track record of artistic achievements. The previous 40 competitions had been open only to holders of degrees from academies of art or artistic departments of other institutions of higher education.
The submitted works are evaluated in two stages by a jury of recognized artists, art critics and historians who are appointed for each individual biennale. The best paintings are selected for the final exhibition which provides an excellent opportunity to examine the state of Polish painting. On average, between 400 and 750 artists have submitted their entry to the competition over the last ten years.

The competition has been held under the auspices the Minister of Culture and National Heritage since 1970 (with breaks). The main award called the Grand Prix (currently in the amount of PLN 30,000) is funded by the Minister of Culture and National Heritage , the second prize (PLN 20,000) is presented by the Marshal of the Province of Silesia , and the third (PLN 10,000) by the Mayor of Bielsko-Biała.

In addition to the main prizes, the jury awards five honourable mentions  (PLN 2,000 each) which are sponsored by local companies. There are also honourable mentions presented by the editorial staff of art and culture magazines, including online services. Accompanying the exhibition is a comprehensive catalogue, as well as numerous events promoting the biennale and the participating artists. These include guided tours of the exhibition with the jurors and artists, a discussion panel on painting, lectures and workshops delivered by the participating artists.

Lauched in 2011, the website of Bielska Jesień www.bielskajesien.pl provides a platform for submitting applications in each biennale, a virtual gallery and an archive with information and illustrations relating to the entire history of the competition. 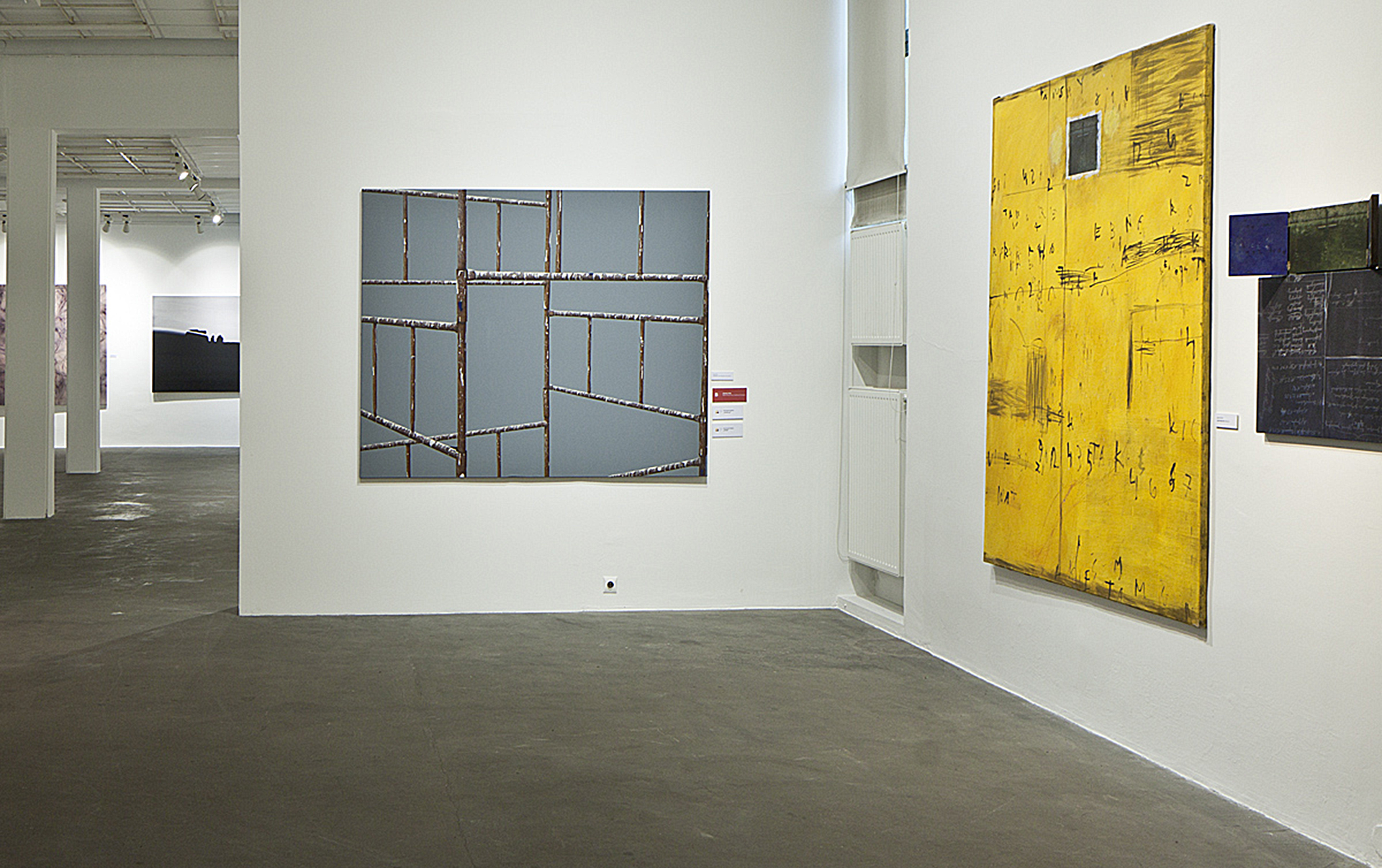 Between 1970 and 1974, Bielska Jesień was organized by the local branch of the Association of Polish Artists, which cooperated with the Katowice branch of the Bureau of Artistic Exhibitions. With the establishment of the Province of Bielsko-Biała in 1975, the organization of the competition was assumed by the Bureau of Artistic Exhibitions in Bielsko-Biała, which became Galeria Bielska BWA in 1994 when the institution was taken over by the local government of Bielsko-Biała.

From the very start, the works selected for the competition were displayed in the Exhibition Pavilion – a one-story building erected in 1960 on the initiative of the local artistic community. After extensive remodelling and expansion in 1989, the pavilion received another large exhibition hall on the newly added first floor. Now the entire exhibition area, including the entrance hall and cafe, both frequently used for the purposes of Bielska Jesień, measures about 500 square metres.

The first two presentations in 1962 and 63 were held as simple art reviews without selecting winners. After a break in 1964, Bielska Jesień adopted the form of an annual competition in 1965 which was continued until 1995 (with another break in 1982), after which it has been held on a biennial basis.

1999 marked the beginning of the curated exhibition – an event held in alternate years with the biennale, which aims at the presentation of major trends in Polish painting. Here, it is the role of the curator,  always well-versed with the latest developments in art, to select the  most significant phenomena.

Until 1997, the main prize in Bielska Jesień was the Gold Medal and the Minister of Culture and Art Award, followed by the silver and bronze medal for the second and third place respectively.

These main prizes were complemented between 1977 and 1981 by the Silver Palette awarded for outstanding achievements by the President of the Provincial National Council in Bielsko-Biała. The medals (designed by Bronisław Chromy, Karol Kubala, Bronisław Krzysztof, Lidia Sztwiertnia, Jacek Sarapata and others) were awarded from 1965 until 2001.

From 2001 to 2005, the main award was accompanied by a bronze statuette, which was reinstated in 2015 as part of the Grand Prix; the original statuette was designed by Adam Myjak and those in the subsequent competitions by Ryszard Kwak.

There were some interruptions between 1970 to 1993, but no further breaks have been reported since 1994.

The winning work has been passed on free of charge to the organizer of the biennale since 2007 when the financial value of the Grand Prix increased substantially. In recent years, also the works awarded the 2nd and 3rd prize (one painting of each set) have become the property of the Gallery, thus enriching the Art Collection of Galeria Bielska BWA.

The exhibitions have been accompanied for several years by scientific sessions or discussion panels with art critics and theorists from all over the country. Viewers are also welcome to participate in an exhibition tour and discussion with a moderator, members of the jury, artists, media representatives and journalists – an activity which started in 2015.
There are also educational activities, such as workshops run by the artists participating in the final exhibition, a series of artistic classes entitled Understanding Painting which are related to the themes featuring in the exhibition, workshops on creating animated and impression films, and journalistic study groups in which participants attempt to develop artistic sensitivity, as well as learning to write exhibition reviews and analyze individual paintings.


Published for promotional and documentary purposes, the exhibition catalogue contains essays on painting, biographies of artists and reproductions of the works by each participant. Other printed materials include invitations, informational posters, reproductions of award-winning works, folders and leaflets, calendars, commemorative tickets and more. All the major events happening during the biennale are recorded digitally, and the then most interesting pieces are posted on the Gallery website in the form of spots, short impression films or promotional footage which is also available on YouTube and other Internet channels.

In 2013, Galeria Bielska BWA launched an intensive campaign on the Internet and in social media to promote the works submitted to the competition and the artists who have created them.

The official website of the competition, www.bielskajesien.pl, contains photographs of all of the paintings submitted to the competition. Available for viewing for more than six months, from June to December, this virtual gallery is an effective way to promote the art works and the entire competition while also offering the viewer a chance to compare any of the paintings with those selected by the jury.

The virtual gallery is also used for an online competition for the most inspiring artist participating in the painting biennale. The results of the competition are posted on the websites of the Gallery and Biennale, as well as in our press releases and newsletter.

The final exhibition is on view for nearly two months. One of the forms of audience participation in the competition is a vote for the best work of Bielska Jesień.

In its history, the exhibition of Bielska Jesień has been presented in other local venues in addition to the Gallery building. They were the State Museum in Bielsko-Biała in 1969, the Technological and Textile Museum in 1992, and Sixt’s Villa at ul. Mickiewicza 24.

The official website of the Painting Biennale Bielska Jesień, www.bielskajesien.pl was launched in 2011. It contains archival material from the entire history of the competition since its assumed beginning in 1962 which marked the first competition of visual arts.

Detailed information about the history of Bielska Jesień can be found in the tab: PREVIOUS COMPETITIONS.

The tab contains 44 sections corresponding to individual exhibitions, with all the available data garnered from exhibition catalogues and Gallery archives.

Website visitors can find information about the changing names of the event, dates of exhibitions, venues outside the Gallery, organizers and co-organizers, media patrons and sponsors, as well as the names of all the participating artists, jurors and curators, winners of the main awards and lists of the winning works. Other data include the name of graphic designer s (of posters, catalogues), medals and statuettes and exhibition arrangements. There are also descriptions of catalogues accompanying individual exhibitions and bibliographies for individual competitions. The illustrated material includes photos of catalogue covers, reproductions of the award-winning works, exhibition documentation and photographic reports from exhibition openings.

The list of winners of all the competitions can also be found in the tab: WINNERS.

The website is regularly updated with new photos of works and short biographies of artists participating in the Painting Biennale and Curated Exhibitions (tabs: ARTISTS and WORKS).

More information about the curated exhibitions can be found in the tab: CURATED EXHIBITIONS.

Note!
The website of Bielska Jesień is currently under reconstruction; visitors may experience temporary problems with access.

***
For any queries regarding information on this website, please contact the curator of Bielska Jesień, Grażyna Cybulska; e-mail: bielskajesien@galeriabielska.pl, tel. 509 404 123.